And far to the east the land which is not land

whose furious winds and angry rains

and trembling lands and crashing waves

say to all who enter

“Here is the death which comes for all

taken shape, in soil and in earth; 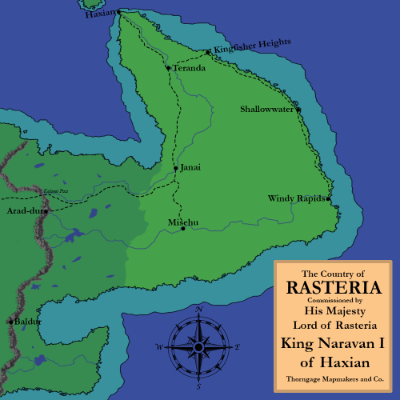 Rasteria (from Elvish rastri, lit. “death”) is one of the traditional 51 countries of Ornia. It consists of a large peninsula on the east side of the Azjeian continent, bounded by the Darivian mountains. It is often given the nickname “The Forgotten Kingdom” due to its relative isolation and extreme climate.

The Rasterian peninsula has been inhabited by sentient beings for well over 250,000 years. Its first mention in literature is in the ancient epic the Orden-Far, wherein a clan of dwarves are said to live in the mountains.

Rasteria is located in Eastern Azjeia. It is separated from the rest of the continent by the Darivian mountain range. The Darivians are notoriously impassable due to their height - the 50-km long Kolanoi Pass between Rasteria and Rejunico is only open a few times a year.

The western half of the country is composed of exposed volcanic rock. Cliffs, valleys, and hills dominate the topography. The region is rich in minerals and precious metals like iron, copper, gold, and electrum. Agricultural activity in this area is uncommon, with communities mainly subsisting off mining and trade. Temperate rainforests cover this region.

Flat and arable grasslands are common in the east of the peninsula, where the bulk of the population resides. Due to its flatness this region is severely impacted by storms. Flash floods are common.

Rasteria’s coasts are quite shallow with waters barely reaching neck-height for hundreds of kilometres from land. This makes the country uniquely unfriendly to large ships and boats. The only area of the country whose coasts are suitable for trade is the city of Haxian, which sits on the south side of the Banah Strait between Rasteria and Therst. As a result, the city gets much of the large-scale trading going into Rasteria.

Rasteria has an extremely stormy climate due in part from cold air from the Darivians meeting warm air from the Great Ocean. Most days are rainy, with only a few days being sunny. As a result, landslides and flash-floods are common.

Temperatures are temperate year-round, with snowfall being uncommon outside of mountainous regions. The year can be split into two seasons: wet season in the latter half and dry season in the former. Dry season is the busiest time of year as most of the trade and agricultural activity is done well before wet season. Despite the name, dry season still gets quite a lot of rainfall; storms are not as intense, however.

Hurricanes are famously common in Rasteria. The country gets around a dozen hurricanes every year. These storms tend to be unpredictable and quite destructive. Housing and architecture in the country is built to withstand these storms. Most buildings are made of solid stone with roofs made of naturally water-resistant bendtree wood.

Rasteria is sparsely populated. Most populated areas of the peninsula sit in the east. Haxian is the largest city in Rasteria, followed by Janai. Villages and towns dot the country with most falling under the charge of a feudal lord. These villages are mainly agricultural towns subisting off simple grains. Mining communities are common in the west and the south.

Of all sentient races in the country Humans are the most common, followed by Halflings, Dwarves, then Elves. Humans and Halflings mainly live in the major cities and towns. Halflings in particular make up most of the fishing communities in the coast. Dwarves have large mining communities in the mountains, including Arad-dur and Buldan. The country’s Elvish population are known as the Carandai, concentrated in the forests and mountains of the west. Elvish visitors from abroad are known to take pilgrimages to the mountains of Rasteria, which are considered holy as the final resting place of mythical Elvish prince Varssanian.

Flood-resistant crops are preferred in Rasteria due to its stormy climate. The most popular crop is rice; paddies cover much of the arable land in the country. Other crops include root vegetables and legumes such as potatoes, yams, sweet potatoes, and beans. Domesticated varieties of indigenous flora are common, including bendtree and bitter granvi. Wheat and barley are grown intermittently throughout the year, mainly by the Dwarvish population. Dried crops are stored in large underground silos called altacks. These silos remain cool and dry year-round - they play an important role in preventing famine after storms and hurricanes. Preservation also plays a key role in the region’s cuisine, and food is often fermented in altacks as well.

Large, robust livestock are preferred. Water buffalo is used to till rice fields and as pack animals. Cattle is highly prized for its meat and dairy, with beef making up a significant portion of the country’s diet. The domesticated giant mole is an important animal for the Dwarvish population; although other communities merely consider it an uncommon delicacy.

Fishing is common in the region. While the country’s extremely shallow waters make large-scale ship-based commercial fishing impossible, many coastal communities subsist on fish. These communities often employ an indigenous form of fishing called arna, which involves catching fish by hand or by spear. Skilled arna fishermen are much more effective than line or even net fishing in Rasteria’s shallow coasts.

The region’s Elvish population relies on foraging and hunting, for which the peninsula is quite rich. Wild fruit and mushrooms are common: the most famous is the nutrient-rich bendtree fruit, whose wild varieties are considered vastly superior to their domesticated relatives. The protein source most important to the Elves are Rasterian deer, a large species of deer well-suited to the region’s stormy climate.

While the region has developed techniques to mitigate disasters, it is still common for Rasteria to fall into famine. Much of these food shortages come after destructive hurricanes, for which the country is famous. The population most resistant to famine to are the Elves, as they rely mostly on robust native foods.