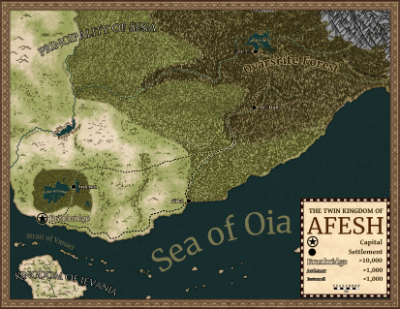 Afesh was one of the 51 traditional countries of Ornia. It was located on the southern coast of North Oia, across the Strait of Vanari from Ievania. It was separated from Sesia by the River Korev, and from Asait by the Jorai Mountains. It has been the birthplace of a few influential states, most notably the Sesian-Afeshi Empire and the Twin Kingdom of Afesh.

Afesh was located on the northern coast of the Sea of Oia. The country’s climate was temperate to cool, with the southern part of the country being the warmest. The northern and eastern parts of Afesh were quite cooler, with snowfall every year. The country saw four distinct seasons through the year, although rarely getting very severe.

The population of Afesh was mainly concentrated in its westernmost third, which was the warmest and flattest part of the country. This area was heavily deforested, with the most significant wooded area being the artificial forest that surrounded Lake Ardenar. The eastern two-thirds, by contrast, were heavily forested and mountainous, with a sparse population. The coniferous Ovarsrite Forest dominated the eastern landscape with its dense, almost impassable vegetation. What little population resided here were mainly mining colonies, with Fortitude being the largest town. Notably, Dwarvish population was sparse in this area as well, as clans and settlements migrated westward as heavy trading became much more profitable than mining gold.

The country’s population is mostly human, with Dwarves having a comparably large population. Elvish presence is quite low, although there are diaspora populations primarily from Olaria concentrated in the larger cities and towns.