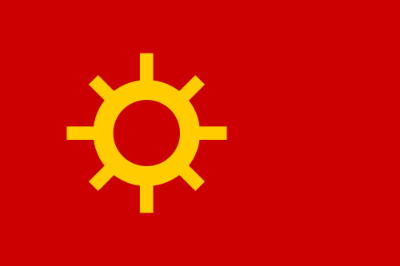 The Second Chamric Empire, commonly known as Chamros as or simply the Empire, was a state that existed from BA 807 to AE 2002. At its height it was the largest empire in history, stretching from its native southern Eira to as far north as and eastwards and southwards to western Kolare and Therst. By AE 1567, it held a third of the world’s population of sentient races.

Nominally a union of 67 duchies, the Empire was founded after the end of the Warring States period in Chamros. United under the Emperor in the capital city of Fallhaven, the Chamric Empire conquered much of the Eiran continent by AE 1060. For the first few centuries of its existence, the Empire’s rule was marred by outbreaks of violence and dissent among its conquered territories, collectively known as the Marring of Eira. By AE 1223, the Empire had stabilized and began to establish colonies and trade routes along the Dividing Ocean.

After the defeat of the Karzeilan Empire in AE 1300, Chamros was established as the world’s foremost naval power. Its domination of trading routes around the world meant that it effectively controlled the economies of Kolare and Oia as well as its own territories. Unchallenged by any state, the domination of the Empire coincided with an era of relative global peace. This period ended with the War of the North against the Katabrine Dominion in 1724, breaking its grasp on global power and allowing other nations to take its place in trade. Other conflicts, such as the Chamric-Olarian War, the Zurhiel War, and the Kardic Wars greatly diminished its influence.

Following the Proclamation of 1640 by the Chamrian Church, the Empire established a campaign of political and religious persecution of non-humans and nonbelievers, retroactively known as the Great Burning. Non-humans were practically forced into slavery by human landowners, their settlements burned and populations culled. Ancient unions between the Empire and Elvish and Dwarvish states within its borders were broken and their citizens turned to mere labour. This led to major tensions between the Empire and other nations, eventually leading to the founding of the Katabrine Dominion and the 1727 Ejection of the Chamrons in Olaria. The campaign was suppressed in 1735, but its effects were still felt centuries after.

The Empire was formally dissolved in AE 2002 following the Chamric Civil War. The Republic of Chamros assumed its predecessor’s roles, acting as its successor state.