Ejela was beautiful once. It was peaceful. The very model of a people happily coexisting. Then they destroyed themselves. - Theren Moonbrook

The Ejela Isles were one of the 51 traditional countries of Ornia. For most of their existence the islands were dominated by the Ejelan Federacy, a union of five Elvish tribes. It consists of an archipelago in the Ejelan Sea nearby Lagos, Udril, Fentoz, and the Denozine. The Isles were known for their lush vegetation and tropical climate. It is the only place on Ornia where Spirit Orchids are able to grow.

Beginning in the mid-1500s, Ejela suffered an extreme drought, killing much of the island’s flora and turning the once-fertile land to dust. Much of the marine life in the Ejelan Sea began to die out, leaving the Isles in a state of extreme famine. Many outside forces took advantage of the weakened state of the Federacy, most notably the Afeshi Mercantile Union Corporation. The AMUC set up many settlements around the Isles, most notably the “capital city” of Xurnwei. 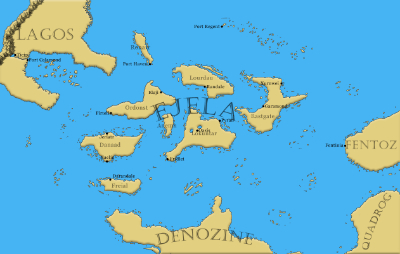 The Isles consist of a series of eight main islands.